From the Glukhovsky elevator “Rostok Holding” to the Mironivsky plant for manufacturing groats and feeds, grain, arrested during investigative actions, was illegally exported. This was announced by the lawyer Mikhail Velichkovich, representing the interests of the injured party.

Velichkovich also added that “the management of Rostok Holding, organizing the export and embezzlement of the arrested grain, deliberately puts at risk all those involved in these illegal activities, ranging from elevator workers, grain truck drivers, to buyers of such grain. In fact, the management of the Mironivsky plant for manufacturing groats and feeds is directly involved in the theft of arrested grain together with Rostok Holding.

The lawyer drew attention to the fact that “the legislation of Ukraine provides for criminal liability for embezzlement, alienation, concealment of property or other illegal actions with the property that is under arrest or listed, or violation of the restriction of the right to use such property by a person entrusted with this property “. Such actions are punishable by a prison sentence for up to two years, with the deprivation of the right to hold senior positions for up to three years.

As the media wrote earlier, on November 16, law enforcement agencies as part of the criminal investigation into the fraudulent activities of the owners of Rostok Holding conducted inspections, sanctioned by the court at grain elevators belonging to the agricultural company. According to the results of investigative actions, the grain belonging to Rostok Holding enterprises stored at the grain warehouses of the agricultural holding in Glukhov and Novgorod-Siversky was listed, confiscated and transferred for safekeeping to elevator managers. The grain stored at the indicated elevators can neither be sold nor exported. 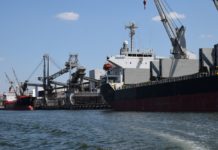