Farmers in the Volhynia region are urging the Antimonopoly Committee of Ukraine to address the issue of purchase prices for raspberries. This was reported by Anatoly Gritsyuk, a deputy of the Volhynia regional council, “Volyn UA” reports.

According to him, local suppliers of berries force Volhynian farmers to take radical actions. Agreeing with each other, they offer local producers too low prices for products. The farmers, having lost hope for the proceeds from this berry, decided that it was more profitable to uproot the raspberries.

Gritsyuk says that now raspberries from Volhynian producers are bought at a price of 10-12 UAH/kg.

“We need state support. AMCU should intervene in resolving this issue, because the producers refuse to grow raspberries on a large scale,” he says.

By the way, the prices for raspberries in this season were low not only in Volhynia. Analysts of the market “Shuvar” argue that since the beginning of the season the price of berries in the wholesale markets was at least 20% lower than last year and was 15-17 UAH/kg. The processors offered the price 1.5-2 times lower than the specified price.

In this regard, the export of berries from Ukraine over the past four years has grown 10 times and amounted to about 30 thousand tons in 2017. According to Irina Kukhtina, president of the Association “Yagodovodstvo Ukrainy”, the most massively exported is raspberry, and its main buyer is Poland. 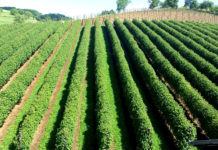