Cargo called Bee changed its name to Dallas, under the flag of the Comoros Union, took out the Crimean grains from the ports of Feodosia and Kerch in 2017 and goes to the Egyptian port of Alexandria, according to the center’s portal. “Peacemaker”.

It is reported that on May 3, the ship passed through the Bosphorus to the Black Sea, said the direction to the port of the Caucasus and headed towards the Kerch Strait, changing the flag on the way (formerly a Sierra Leone flag travelled under the flag of a Pirate ship) and the name. 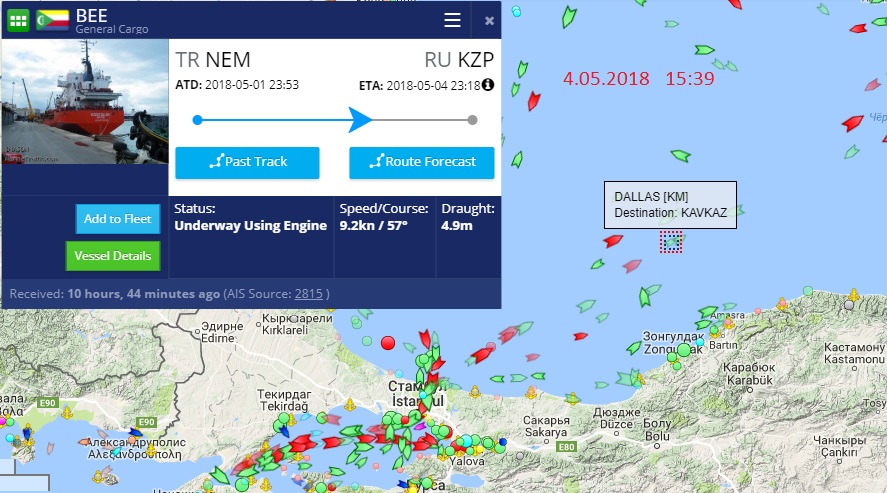 Before passing along the Crimean bridge built by Russia, the ship shut off the AIS (Automatic Identification System), and took an action at the closed port of Kerch. There the company Novik-Kerch loaded Dallas with grain in the amount of about 2300 tons. But it is not enough for the ship – you need to reload. Therefore, it is headed to another closed Crimean port – Theodosius.

Dallas entered the port of Theodosius in the morning of May 10. Here the vessel made a reloading of grain and May 13 went to sea.
Currently Dallas is in the Black Sea on the way to the port of Alexandria.

We remind that during the April, 26 cargo vessels and tankers were taken to ports of the Crimea. All of them were under the flag of the Russian Federation. Events took place in ports of the occupied Sevastopol, Feodosia and Kerch.