Today Ukraine can be called a pig without pork. The national product becomes inaccessible to most Ukrainians, because the prices for it are already higher than in Europe and overseas. The cheapest pork in half-carcasses in November 2017 was in Canada, Brazil and the US – 1,1-1,2 euros per 1 kg. Traditionally, the high price in the EU is 1.4 euros. But Ukraine is breaking world records: EUR 1.8 without VAT! That is 30-50% higher than in other countries. But this does not mean that in domestic pig production, with an increase in prices, everyone receives superprofits, because in Ukraine, 50% higher and the cost of livestock products, including pig production. Reduce the price would help import. But the delivery is 0.1 euro / kg, the import duty is 12% and the VAT rate is 20%, the highest among other countries, do not allow this. For the EU, there are quotas with 0% import duty per year for 10 thousand tons of chilled pork and 10 thousand tons of frozen meat. But this is not a big amount, considering that the own production in Ukraine in 2016, according to the State Statistics Committee, amounted to 748 thousand tons.

In December, the price of imported pork from EU is almost equal to domestic. Imports from Brazil, Canada, the United States have a margin of 15%, and even more (with a lower price in the invoice – a common practice), but it is not so much, given the instability of the hryvnia and the long delivery in 3 weeks. From this we can make a prediction that we are all hostages of domestic prices. Obviously, the price for pork will remain high – at UAH 50 for live pigs and up to UAH 70 for half carcasses (VAT included). A high internal price leads to even less meat consumption. It has already, according to FAO, a record decrease in 2016 to 14.7 kg per one Ukrainian, for example, compared with 40.8 kg in the EU. We are waiting for new antirecords in 2017 and 2018 Pork in neighboring Poland in supermarkets is sold at a price of 75 UAH, which provides a higher demand for pork from Poles with three times higher income than in Ukrainian. On the neck in supermarkets in Ukraine can reach up to 140 UAH

In Ukrainian pig complexes there is a great potential for additional earnings due to a reduction in the cost of raising pigs and to reduce prices for live pigs. The latter will help to reduce retail prices for meat, at least to the level of Poland. Above other countries, the cost of pork in Ukraine for several reasons. Firstly, it is corruption in purchases and sales, over-expenditure on fodder and veterinary drugs. In many farms the technology is distorted, when each manufacturer “invents a bicycle”, there is no reliable accounting and proper control of technologies on pig farms. There are no effective measures to counteract the spread of ASF in the country. Annually the number of registered cases of ASF is doubled. And for compensation to the affected pigs from the ASF, the budget is not in the budget for 5 years. Finally, industry associations defend the interests of not the enterprises of their industry, for example, poultry farmers. 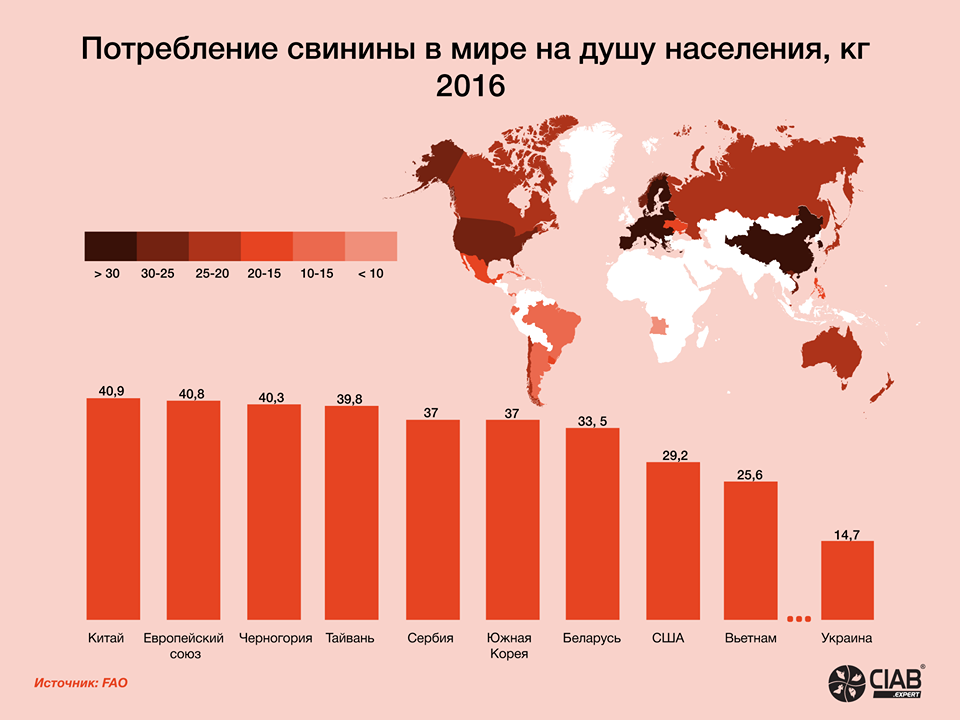 Make available Ukrainian pork can only those who grow it. And they can take several steps to solve the high cost problems. Step 1. Conduct an audit of production, introduce accounting for pig complexes in specialized programs with cost control. Step 2. Change the principles of feeding in the light of current knowledge and, in general, introduce comprehensive changes in technology. Step 3. Properly monitor your own business to prevent abuse in procurement. Control the quality of raw materials so that unscrupulous subordinates can not use falsified amino acids, premixes, meals and oilcakes. Step 4. Go from treatment to disease prevention and reduce the use of expensive antibiotics. Nikolay Babenko, General Director of LLC “Center for Improving Efficiency in Livestock”