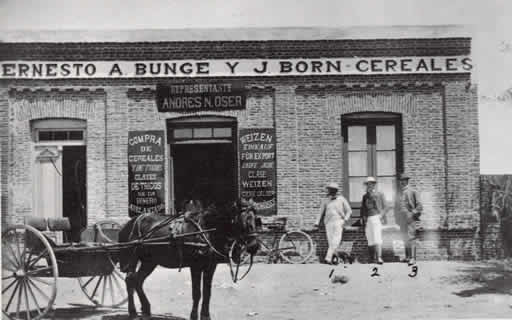 September 19, 1974, in the center of Buenos Aires shots rang out. At the crossroads of two streets, the truck crashed into an expensive limousine. Armed men jumped out of it, disguised as employees of the communal service, killed the driver and one of the limousine passengers, pulled out two other riders and, hustling them into their car, disappeared in an unknown direction. The operation was performed perfectly, having entered the history under the name “Twins”.

The two abducted people were the brothers Jorge and Juan Born, co-owners of the famous transnational corporation Bunge & Born, Argentina’s largest and one of the most important producers of soy, cereals and processed products.

Their captors, left-radicals from the group Montoneros professed views Peronism – the ideology that emerged in the 40s during the presidency of Juan Peron as an alternative to neoliberalism. Although by the early 1970s, Montoneros had already carried out a series of abductions of well-known Argentine politicians and finally reached a large capital, they had a special relationship with Bunge & Born.

The oldest Argentine monopolistic group founded in 1884 by Belgian immigrants and became a transnational corporation, held in Argentina from 90 enterprises 20 thousand staff, 552 thousand hectares of land, had the influential positions in finance and trade. The group had 11 branches in Argentina and 36 in other countries.

Therefore the followers of Peron, singing the marches about the struggle against capitalism, meant primarily the local giant Bunge & Born. However, even after 10 years of the regular follower of the ideas of Peronist President Carlos Menem appealed to the largest corporations for help in resolving the next economic crisis – one of many that were accompanied by the board and left the military in Argentina.

Throw across the ocean

In 1818, in Amsterdam, Johan Bunche established the import-export trading company Bunge Company, with which the history of the Argentine corporation began. His grandson, Ernesto Bunge, continued his hereditary business already overseas, along with his brother-in-law Jorge Born, who also emigrated from Holland, from Antwerp.

In 1884, Bunge and Born created a grain trader company, and in 1905 the company expanded to Brazil, and in 1918 it also developed in North America, the largest agricultural market at that time.

Having bought 60,000 hectares of land in Argentinean fertile pampas, in 1899 Bunge & Born built its first food processing plant – the Centenera plant. And on its basis arose the company Molinos – one of the leading enterprises of the corporation.

Molinos has become a strategic partner for such big food giants as Danone, Kraft, Nabisco, Nestle, Unilever. In the years of Bunge’s heyday, 37,000 employees worked at 90 corporation enterprises. It became the third largest producer of processed soybean on the planet. In the annual turnover of the company of $ 13 billion more than 8 billion were in primary production and trade in soybeans, and the rest was other food. The area of land has reached 552 thousand hectares.

Having pulled Born brothers from Ford Falcon de Luxe and taken them away to an unknown direction, the militants from Montoneros claimed to be responsible for the abduction that evening. The Borns were released a few months after the repayment of $ 64 million, the largest in history at that time. The money was taken from the treasury of the company.

After the incident, Bunge & Born moved its office from Buenos Aires to Sao Paulo, and the incident itself brought closer the next state coup in Argentina in 1976.

Only 13 years later, in 1987, the court sentenced Mario Firmenich, the leader of the left-wing partisans, to a life imprisonment. The persecution of the Firmenich was part of the policy announced by President Raul Alfonsin when he took office in December 1983. He wanted to bring to justice both the guerrilla leadership and the military leaders who took power in 1976.

At the same time, Alfonsin began another anti-inflationary reform. However, after some improvement, the economy stagnated again: in 1988 the growth rate of the money supply was more than in 1985, in 1989 the price increase was already 3079%, the GDP decline – 6.2% per year.

Even the new monetary unit did not save Alfonsin from failure. Then a new leader appeared on the political scene – Menem, who, although a follower of the leftist ideas of Peronism, decided that he should not experiment with the country once again. He bet on big business, adopting a plan to save the economy, proposed by Bunge & Born and named BB.